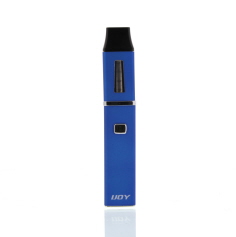 Vapor cigarettes continue to increase in popularity, but many people are still unsure if they should make the switch from the traditional cigarette they've known for so long. Vapor cigarettes, also known as a vapor pen or vape pen, use a heating element to turn a concentrate, like wax or flavored liquid, into white water vapor. Since nothing is being burned, there is no ash or smoke. Vapor cigarettes are about the size and shape of a fountain pen and are powered by rechargeable batteries. Concentrates come in three forms, but the majority of vapor cigarettes are not compatible with all three.

1.  Similar to a hookah, dry herbs are crushed or ground and inserted into the pen cartridge or tank where they are vaporized and the aromas released.

2. Vape oil is the most popular concentrate and consists of food grade flavoring mixed with vegetable glycerin, and sometimes propylene glycol or polyethylene glycol. Vape oil comes in a number of different flavors with and without nicotine. Oils come in pre-filled cartridges or bottles.

3.  Similar to vape oil is vape wax, which is not as hard as beeswax, but is the pure concentrated form of a particular substance. Because they are concentrated, the substance is stronger, allowing you to use less for the same effect.

Users of vapor cigarettes in Florida have found that their ease of use makes them a convenient and better alternative to traditional cigarettes. Vapor cigarettes and their concentrates come in a variety of forms, and finding the one that suits your personality and lifestyle best can take some trial and error. Confused? The staff at Aqua Smoke can help.

WARNING: This product contains nicotine. Nicotine is an addictive chemical. Our products are intended for persons of legal smoking age only and not for sale or use by children, women who are pregnant or may become pregnant or any person with an elevated risk of any medical condition including heart disease, diabetes, high blood pressure or asthma. If you experience any side effects; stop using the product immediately and consult a physician. Our products have not been evaluated by the Food and Drug Administration. Please keep in a safe place out of reach of children and pets. Read our terms of use page before purchasing our products.
Copyright AquaSmoke. All Rights Reserved. eCommerce Software by 3dcart.
TOP